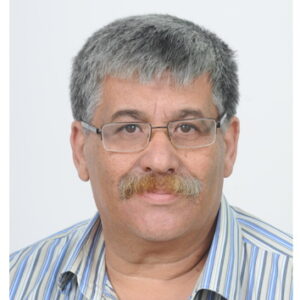 A Palestinian civil society activist and a senior health professional, was trained in the former Soviet Union and France, with post-graduate training in Epidemiology & International Public Health from Emory University & CDC – Atlanta-Georgia, USA.

Dr. Khammash was a key actor in the introduction of modern concepts and models of health care in Palestine; he set the foundation for community and grassroots approaches and philosophies in the country as opposed to the medicalization of health care; In early 1980s he and a number of like-minded doctors and health professionals established the Palestinian Medical Relief Committees a leading community based health movement of which he served as the general director for several years.

In 1995, Dr. Khammash became the chief regional technical advisor and the representative for UNFPA in Central Asia, his work covered 6 republics (Uzbekistan, Kyrgyzstan, Kazakhstan, Turkmenistan, Tajikistan and Azerbaijan), then after in 1998 he was appointed as the director of UNRWA health services for the Palestinian refugees in the West Bank until his retirement where he moved to Juzoor for Health & Social Development first as senior advisor and later as the Director until today.

He was a founding member of several health organizations and projects both nationally and internationally, such as “Juzoor” for Health and Social Development, the Center for Primary Health Care with AL –Quds University, Middle East Health Policy Forum, Palestinian Health Policy Forum, Palestinian Coalition for Adolescent Health, the ECD regional network and the International People’s Health Council in Nicaragua in the late 1980s whereby he served as Vic –chair for some years.

As a civil society activist Dr. Khammash represented the Palestinian NGOs in the International Coordinating Committee on the Question of Palestine established by the UN during the period between eightieth and nightlight, and in the early 1990s he took a leading role to establish the Palestinian NGO network which includes over a hundred organizations in the WB & Gaza. He served and still is, on the board of trustees for several organizations such as: Woman Center for Legal Aid and Advice, the Palestinian Counseling Center, MUWATEN a Palestinian establishment for the study for democracy, Popular Art Center, the International Board of Emory University in the USA, and Tammer Institute for community education.

He served in different occasions as Advisor to the minister of planning, minister of health and member of the committee to reform health sector under the prime minister and took the lead to establish the Palestinian population committee.

He wrote a number of articles and books:  of which is: “Sexual Health for Children and Adolescents” and “Health and Globalization”